The weather in Miami has two main seasons, really nice and really hot and humid.  The best weather starts in October and lasts through April and there is no better place to be if you love the beach.  May through September can have some really nice weather days but generally it is very hot and humid with thunderstorms, lots of rain and an occasional hurricane.

The winter months of December, January and February can see days in the 50/60s and night time lows in the 30s as cold weather pushes down form northern Atlantic storms.  This type of weather is usually brief with pleasant temperatures returning quickly.

I have visited Miami several times during all seasons with October thru February being my favorite months.  February is cooler with less rain than October but I like the warmth of the fall season in Florida, even if it means more rain.

Miami and South Beach have some of the warmest water in the world, rarely getting below 70 degrees and often times approaching 90. 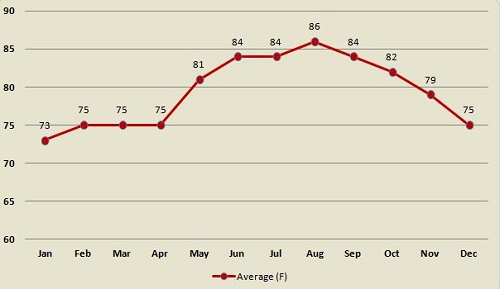 Hurricane season in Miami starts in June and last until November. On rare occasions a storm could impact southern Florida in early December. On average, Miami get affected by a hurricane every two years, either by a direct hit, a glancing blow or brushed by the remnants of a tropical storm.  60% of the storms are hurricanes while 40% are tropical storms.

Andrew was a category 5 hurricane but was a very compact storm with the inner eye wall only 25 miles in diameter which limited it's massive destruction to the center's path.

Weather forecasters claim that if a major class 4 or 5 hurricane were to hit Miami, it could result in upwards of $250 million in damages.

Top of the Page