Restaurants   Resorts and Hotels   Weather   Things to do   Maps   Webcams

An accurate Cancun 7 day weather forecast, as in any tropical location, is very difficult to predict accurately and often times is overly pessimistic. The weather is usually much better than the forecast.  Even if it rains, often times the sun returns quickly.

The best months for visiting Cancun are late December through the end of May.  Hurricane season starts in June and humidity, rain and temperatures increase and remain high through November.

Weather in Cancun by Month
The best times to visit

The weather in Cancun is generally warm all year, however, it can occasionally be cool and there are definitely better times of the year than others to plan your vacation.

Prime vacation season starts in the middle of December and ends in May.

Taking into consideration both temperature and wind, December is one of the coolest months but also is really windy.

Hint ! - If you are planning ocean related activities such as fishing or snorkeling, December is not the month to visit.

My favorite time, and I think the month that has the best Cancun weather, is February and March.   The Spring Break crowds have not arrived yet and daytime highs are in the mid 80s and nights in the mid 70s. The humidity level is not too bad, winds are generally light and the ocean water is in the 80s.  Hurricane season has not started nor is it really a threat until mid-June.

I have been there several times in early December. Most of the time the Cancun weather has been in the high 70s to low 80s during the day and in the 60s at night. Once I was there during the International Global Warming Conference and it was the coldest week in the last 100 years with lows in the 50s and highs only in the 60s and low 70s with a lot of wind and rain. 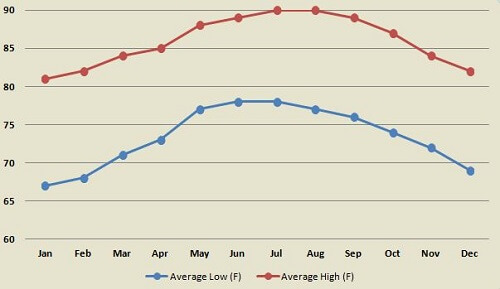 The rainy season coincides with hurricane season. The summer months are very humid with much more rain than in the winter months. However, there are many summer days that have great weather.

Hint ! - If you don't like really hot and humid, go to Cancun in the spring.

The coastal weather in Cancun is also tempered by the Caribbean.  If you travel inland to visit some of the Mayan ruins such as Coba or Chichen Itza, the temperature and humidity, especially in the summer months, can be unbearable.  All of the Mayan ruins require lots of walking and climbing. The wintertime temperatures will make the trip much more enjoyable.

Hint ! - unless you enjoy highs near 100 F and humidity at 90% or above, avoid the inland locations beginning in early June through November.  The month of May can even be uncomfortable. 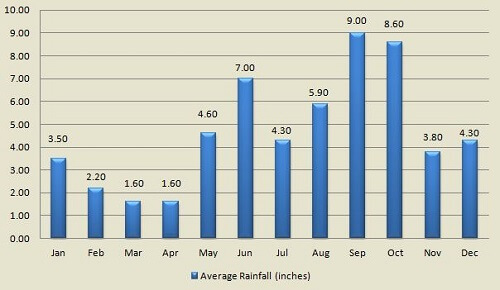 Cancun has some of the best water in the world.  Clear and warm with water temperatures averaging around 80 degrees year round.  Even in December, the average temperature is 78 degrees but it is not uncommon for it to be 80 degrees around Christmas.  There is no better way to get a break from that winter chill than dipping in the Caribbean. 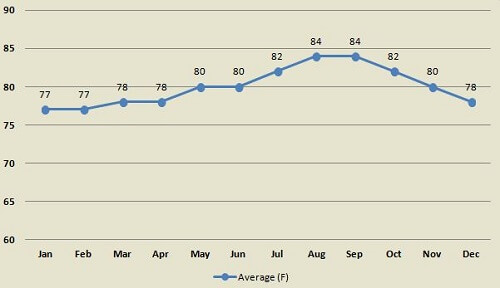 The Cancun weather forecast for hurricanes is even harder to predict.  Due to Cancun's location at the tip of the Yucatan Peninsula, it is right in the middle of the hurricane highway.

About every three years, Cancun is affected by a hurricane with a direct hit occurring every 7 years on average.  Wilma was the last major hurricane to hit Cancun directly in late October of 2005 causing an estimated 3 billion dollars in damage and closing down nearly all resorts for an extended period of time.

Other recent hurricanes that impacted the Cancun region were as follows:

The majority of hurricanes hit Cancun in September and October but still can occur anytime between June and the end of November.

Take a look at the live weather in Cancun from one of of several webcams.