As with most southern California beach communities, Laguna Beach has some of the best weather in the world.  However, there are better months to visit than others.

Most of the year sees brilliant sunshine and mild temperatures, even in the winter.  It rarely gets very hot but if it does it is usually in September or October due to an easterly wind event called a "Santa Ana".  Strong winds from 30 to sometimes excess if 80 mph blow from the deserts, over the mountains and down the coastal slopes toward the beach, compressing and heating up along the way.  During Santa Ana events, the humidity is below 10%.

All of southern California beach communities from Dana Point down to San Diego experience what locals call the "marine layer"  These are night and morning low clouds, fog and sometimes drizzle that can plague beach communities and even nearby inland valleys for weeks at a time.  Usually the clouds will burn off but many times the clouds remain all day, especially along the beach.  The marine layer is most persistent during May and June and southern California locals call it May gray and June gloom because there can be weeks in a row that have no sunshine, no rain, just clouds that all blur together.  The Laguna Beach forecast for May and June is usually pretty easy....clouds, no rain and little sun. 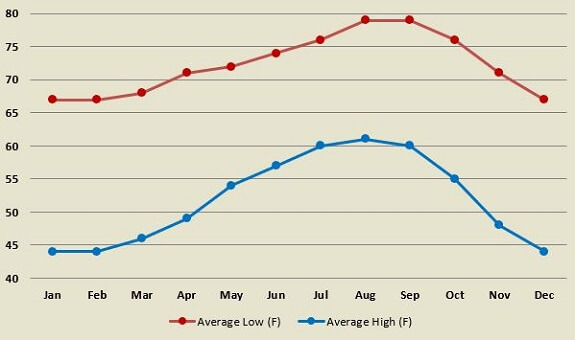 The best Laguna Beach weather is from July through November with October being my favorite month.  During these months the marine layer usually burns off fast or is not present at all.  This is the best beach weather because the ocean water temperature is the warmest in September. 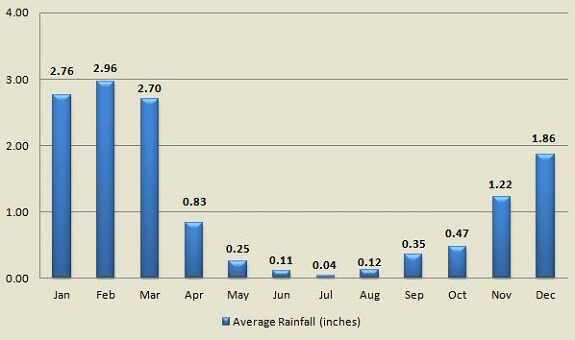 Most rain occurs between January and March and are usually a result of Pacific storms from the northwest.  Occasionally Laguna experiences what is called El Nino where a strong river of moisture from the Pacific streams from Hawaii towards Southern California.  This is commonly called the pineapple express.

The rainfall in the months of September and October are usually due to thunderstorms that approach from the eastern mountains and deserts.  This is usually accompanied by high humidity and increased temperatures. 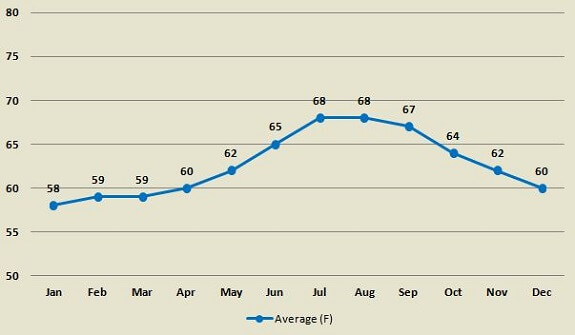 The water is rarely warm in Southern California and Laguna beach is no exception.  During El Nino events the ocean will climb into the low to mid 70s during the months of August and September but usually is in the mid to upper 60s in the summer.