The Maui weather forecast varies greatly with location, even just a few miles. The small size of the island allows you the flexibility to experience all the micro-climates, often in one day, while returning to the one that you like the best for the majority of your stay. 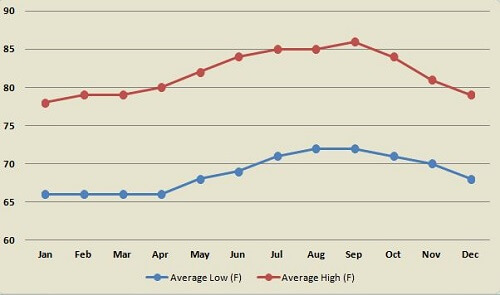 Hint! - The closer you stay to Makena, the more likely your days will be cloudy between the hours of 9am and 4pm. Makena is on the southern side of 10,000 foot high Haleakala crater. As north to south trade winds blow up the slope, clouds condense and grow over Makena for the majority of the day. Temperatures are wonderful but if you like suntanning, this is not the area of the island for you. 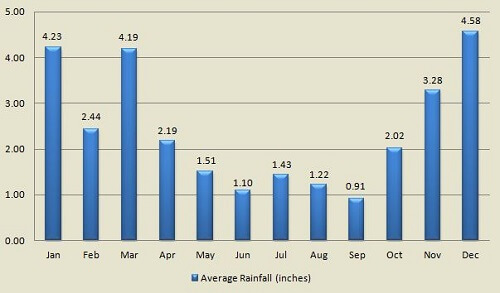 More rain occurs on the Northeastern side of the island in towns such as Huelo, Keanae, Hana, Kipahulu and Kaupo where the influence of strong trade winds forced up the northern slope of Haleakala crater produce over 360 inches of rain in some areas.  Getting an accurate Maui weather forecast for these areas is much more tricky in terms of predicting cloud cover, rain and wind and is often times over pessimistic.

The ocean water in Maui rarely ever gets below 75 degrees.  Even in the winter, the water is warm.  Unlike Caribbean locations where water temperatures can get into the mid to upper 80s, the ocean in Maui will not get much above 80 degrees and is always pleasant and refreshing. 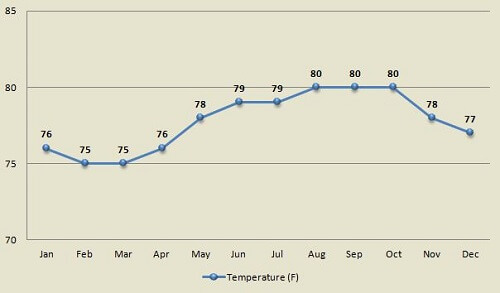 Most the time when you look at the Maui weather forecast, it will always be warm, breezy with an occasional shower.  It seems like the Hawaiian islands are somewhat immune from direct hurricane hits despite being in the Pacific's hurricane highway, however it occasionally does happen.  Most storms originate from the west coast of Mexico near the equator, travel to the Northwest and pass to the south of Hawaii.  Maui has been affected by tropical storms and hurricanes several times but never received a direct hit.  However, several major hurricanes have hit the island of Kauai, the most recent in September of 1992 where hurricane Iniki, a category 4 storm brought winds of 140 mph and killed six people.