The St John USVI weather throughout the year ranges between the 70s at night and the 80s during the day.  Unlike the weather in Cancun, where it can occasionally be cool in the winter, the Virgin Islands have wonderfully warm days and evenings.  The temperature rarely gets into the 90s.

Rainfall, wind and sunshine are not affected as much by island topography as compared places such as Maui because the tallest mountain is only about 1200 feet.  Micro-climates do not exist in St John because the island is small and only has rolling hills.  There are no dry or wet sides of the islands.  As with any tropical location it can be raining in one location and sunny a mile away.  When it does rain, it is generally a cool, soothing shower that refreshes and prepares you for more sun.

The St John USVI weather forecasts can be hit and miss and often times are very pessimistic.  The weather is usually much better than predicted.  Even when it rains, showers quickly come and go with the intense Caribbean sunshine returning.

The rain and humidity levels start to increase in April and May followed by the start of hurricane season in June that runs through November.

I have visited St John three times, twice in early December and once in February.  While both December trips were wonderful, there were more clouds and rain but we still had plenty of sunshine.  February was absolutely beautiful with bright blue skies, light winds and no rain at all making this time of the year my favorite time to visit. 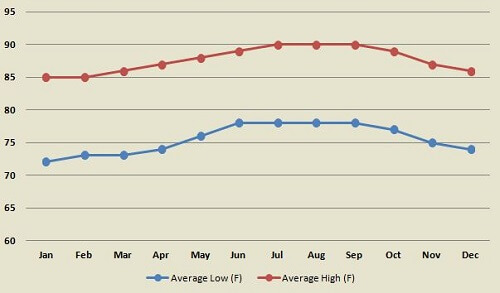 Monthly average high temperatures only vary by about 5 degrees throughout the year, ranging from 85 to 90 degrees.  Low temperatures average around the mid 70s. 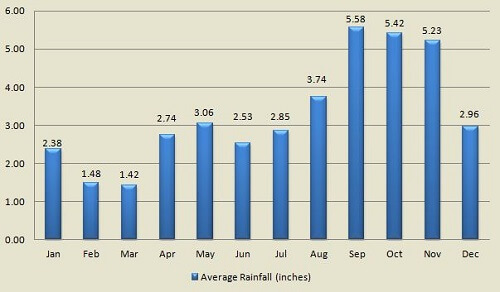 The most rain occurs between August and November and the least in February and March.  Summers are humid as the daytime highs reach around degrees. 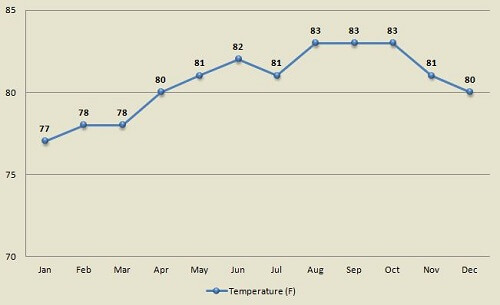 The average ocean water temperature of 80 degrees is perfect, not too hot and never cold.  It is always refreshing and takes the edge off of the intense sun and humidity.