Use our Key West weather averages by month for temperature, rainfall and ocean water temperature to find the perfect time to visit.

Also, check out the current weather, 7 day forecast and learn about the major hurricanes that have impacted Key West.

Between late May and early October, the weather is extremely humid and rainfall plentiful.  This is also hurricane season and due to the location of Key West, strong storms often pass nearby.

The most pleasant time to visit Key West is in late October through April.  Days are in the high 70s to low 80s and nights pleasant in the 60s and 70s.  May can be hit and miss with rain and humidity. 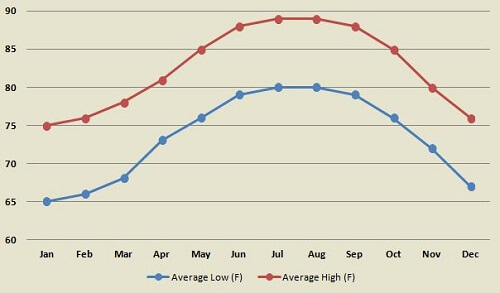 The rainy season coincides with hurricane season. The summer months are very humid with much more rain than in the winter months. However, there are many summer days that have great weather. Hint! - If you don't like really hot and humid, go to Key West in January, February or early March. 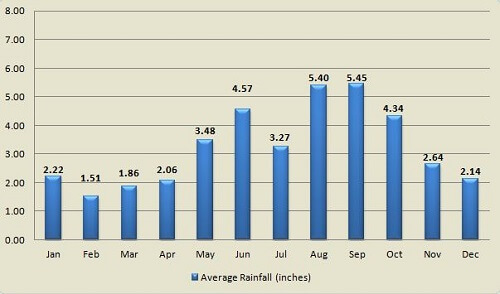 Key West is located adjacent to the northern Caribbean where water is generally warm all year.  Ocean temperatures rarely drop below 70 degrees and the water is crystal clear making water sports such as paddle boarding, diving, snorkeling and fishing very popular. 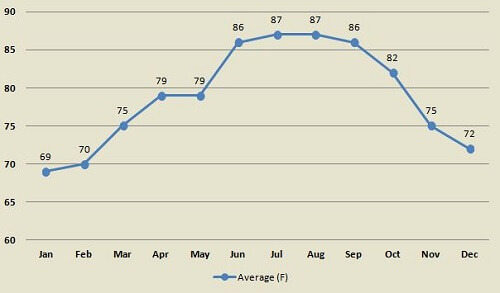 Hurricane seasons runs from June through December with the most activity usually occurring in September and October.

If you have ever been to Key West and seen for yourself how flat the area is, just barely above sea level, you would wonder how anything ever survives any type of major storm.  Even nice weather with high tides during a full moon will bring water up from the storm drains and flood some of the downtown streets.

Knowing this information, it is hard to imagine the impact of the category 4 "Key West hurricane" that made a direct hit on September 10, 1919 and killed more than 600 people.

The most recent devastating Hurricane was category 4 Irma, in September of 2017.  Winds of up to 160 mph killed 17 people in Key West.

There is a great NOAA website that has details about the top 15 hurricanes that have impacted the Florida Keys.  There is a dedicated page for each hurricane that includes origin, path and category tracking, along with satellite images plus a detailed narrative.